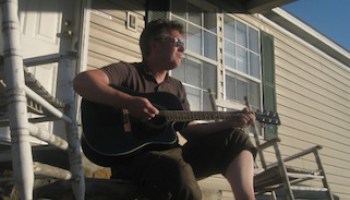 The music of Boz Hayward is pretty much unchartered territory – and uncharted too – with people finding it difficult to draw many clear parallels. Original. Inimitable. Authentic. It is all of those. There are short acoustic pop ditties such as ‘A Song About Nothing In Particular’ or ‘May Day Wake-Up Call’ (ReCaffeinated), and regular jaunts into the world of film soundtracks (James Bondage; Trans-Siberian Railway; Memoirs; The Charles Barry Mole, The Franco Nero Mud Show). In fact Boz is a big fan of John Barry and Ennio Morricone and this helps explain his own particular brand of visual music.

As a kid on family holidays – the youngest and the one that fitted most comfortably on the back ledge of their old 60s Volvo – he would sing versions (in a ‘diddley-do’ manner!) of easy listening classics – Bert Kaempfert one minute, Herb Alpert the next – to the delight (!) of his siblings. It was an early music on the road thing which has informed so many of his songs ‘Beyond the Mersey Lights’; ‘Confessions of an Ice Road Trucker’; ‘Waves’; ‘On The Road’… Then punk happened and Boz formed his band the Incinerators in November 1978 who were soon to become the Violators. Then the character studies Boz – the adolescent people-watching punk – entered his early songs – ‘Russian Spy’ from January 1979 being a particular favourite. This song was very much informed by the characters of a spy serial of the time ‘Tinker Taylor Soldier Spy’ and the Harry Palmer cold war films. Boz’s sound often has Russian/east European/gypsy tinges that also helps make it stand apart…

Boz is obsessed by maps and travel, In the 1950s his father, who played violin until he was 18, declined a place at the Royal Academy of Music, went to University where he met Boz’s Mancunian mum and joined the RAF. This meant his family were stationed at a number of different places and Boz would always want to track where they were: where they were coming from and where they were going to. He’s still doing that now in his music which is littered with soundtracks to accompany the journey and with commentaries about the places life has taken him to. These combine to make this special, visual music. that is mapping his life.

Our release with Boz….

Other self-releases by Boz….