Keltrix blend haunting vocals and soaring strings with electronic beats, bass and synth lines, bridging the gap between alt/folk and electro.  With influences as far ranging as Kate Bush, Bats for Lashes, Massive Attack , Prodigy, Karl Jenkins and John Williams the result is both interesting and engaging. 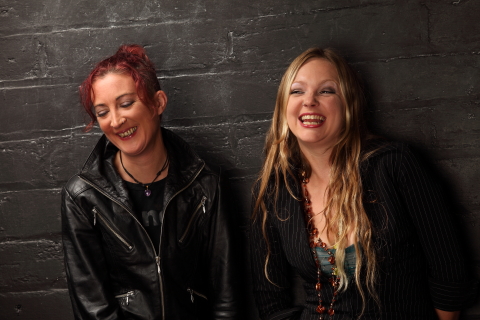 Keri (singer/songwriter) and Sharon (violinist/producer) first met when performing with Dj’s and Live PA’s at dance music club nights back in the late 90’s. It wasn’t until several years later, however, that Keri formed the original Keltrix, an alt/folk/rock band that Sharon soon joined.  After several years, 2 albums and a certain amount of success, a continuing love of 90’s rave and trip hop, along with the desire to progress musically, meant it was time to change direction. The 2015 double album Between Storms (band)/Beyond Storms (electro) was the turning point and Keltrix became a live electro act.

The current live line-up of singer/songwriter Keri Kel,  violinist/producer Sharon Sullivan and DJ Mark Evil are based in Cambridge, but hail from Liverpool and Salford.

Keltrix have played at  numerous festivals, including Bestival and Secret Garden Party and are regulars at Cambridge’s ever-popular Strawberry Fair.

They have several tours under their belt and have supported some of their favourite artists including Dreadzone, Mark Chadwick (Levellers) and Alabama 3.  They are also regulars on a variety of Radio shows including on their local station Cambridge 105, and BBC Radio.  Keltrix enjoy cross-art collaborations, recent highlights including collaborations with a dancer, circus performers and a fire troupe!

The album was reviewed by Dave Hammond in the March Edition of Sounds Magazine.

Keri and Sharon are currently working on new album “Herstory” for release in 2020.