Continuing our relationship with the Cambridge music scene we released The Scissors second album “Haunted Mirror”  in Spring 2016.

The Scissors started in 2006 in Cambridge as a trio; adding organ and primitive analogue synths a year later to mould their sound into a mix of psychpop and post-punk that they continue to develop.  They  have played alongside great acts including Glasvegas, Hey Sholay, Raglans, ex-Kook Max Rafferty, James McCartney (son of Sir Paul), Make Model and Jakil. In terms of venues they have delivered well-received sets in London (Dublin Castle, Camden Enterprise, Hope and Anchor), and in the East of England (The John Peel Centre in Stowmarket, Epic Studios in Norwich). In their home town they’ve played at the Portland Arms, Cambridge Junction, the Corn Exchange, Mill Road Winter Fair and comic/sci-fi convention CamCon. They’re no strangers to local radio, especially Cambridge 105’s ‘Stagger Indie’ show. 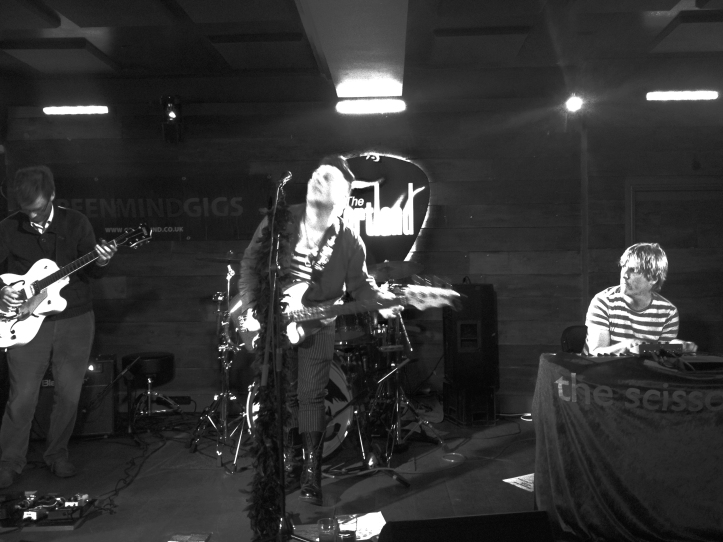 The band deliver a unique sound encompassing carnival freakshow organ, primitive synths, and rock’n’roll guitar powered psych-punk-pop. Their influences are varied, but their sound has been likened to The Teardrop Explodes, The Doors, The Chameleons, Wire,
The Damned, and XTC.

The current line-up of the band is:

They have already self-released via Bandcamp an album “Daylight Cinema” (recently re-released with a new master), a live album “Be Seeing You”, and an EP “Afternoons”.

We released the bands third album “Look Good In Cheap Clothes” in December 2018.

A live recording from the Smokehouse, Ipswich was released in May 2019