After a few weeks off to recharge our batteries we are back with two brand new releases on 10th and 17th January..

We kick of the new year with a new single from The Get.

The Get are a band from Southend On Sea. The main songwriter is Gary Smith who is also a member of another band on the label Angry! Vocals and lyrics are provided by Bruce Gordon who is also the partner in crime of Toska Wilde as Brucie Bitch. Drums are provided by Jon Smith .Bass, Keyboard and Production is from Jordan Ayriss

Their release is called “Genre Reassignment” and consists of three new songs and one which appeared on our recent charity album “Off The Leash”.

This is a digital only release which will be available from Bandcamp, Spotify, You Tube etc from 10th January

Our release for January 17th is from The Screaming Love Collective.

It is their 11th release with us and follows on from last years “Do What You Love”.

The Screaming Love Collective are a psychedelic punk rock dark disco groove sensation  – they take electronic dance music and add some extra layers from a variety of other genres to create an infectious and sometimes dangerous aural cocktail.

The new album is called Human Traces and is a digital only release – it comprises 11 brand new tracks. Here’s a taster……

It will be available from Bandcamp, Spotify, Apple Music and all of the other digital outlets.

Bryn from The Screaming Love Collective  will be appearing on the drum stool with The Mind Sweepers on the following dates:

Hello and welcome to the latest newsletter from German Shepherd Records

7th June sees the return of Space Museum with a mini-album called “Nightmare on Glitch Street”. After a couple of years off concentrating on other projects label co-owner Bob Osborne returns in his Space Museum guise with a predominantly instrumental album. Exploring Asian beats and adopting Stockhausen influenced sound design this latest collection stretches the edges of modern electronic music. The sole vocal track features the other label co-owner Ian Moss with a tongue in cheek homage to Jim Morrison.

This is a digital only release

The German Shepherd Records subscription service is gathering pace with new members joining regularly. This unique offer allows fans to enjoy everything the label releases over a 12 month period for only £40 with a release every week this is a huge bargain. As well as regular releases subscribers will get over 120 back catalogue releases, 10% of all merchandise and exclusive content. Exclusive content released to date includes….

We have the following new releases in the pipeline…..

Welcome to the latest German Shepherd Records Newsletter. This week:

Ian Moss returns as Mistletoe with a new single called “Children’s Home” on 26th October. On this release he is accompanied by Foghorn Leghorn.

A harrowing spoken word performance attacks the institutions who are complicit in allowing children to be abused and in that context all proceeds from the sale of this single will donated to the NSPCC.

This a deliberately lo-fi and stripped back recording in which Ian paints a vivid picture. A further EP featuring three new pieces in partnership with Marc Corrin follows next week

In 1974, two Catholic schoolgirls met at the age of 5 over a scabby knee and sang together in praise of the lord, ‘til they discovered Salvation in the form of Hex Enduction Hour. An explosion of hair spray, eyeliner and ideas ensued.

Julia moved to Blackpool and joined the band The Tingletones as singer before moving to Manchester, when she became singer for the short lived Arthur Badfrown Band. A move to London at the turn of the century saw her finally pick up a guitar. Upon returning to Manchester, she joined Government Death Epidemic as guitarist. She has recorded with Craig Scanlon and Steve & Paul Hanley (ex The Fall).

Anne has sang, go-go danced and played tambourine in 60’s- garage outfit The Stags since 2001. They are stalwarts of the garage scene playing around the UK and Europe and worked closely with Frank Sidebottom.

Max, Anne’s son, has been playing drums and guitar with bands since the age of 13. He is currently playing his own material in punk outfit Bang Up To The Elephant.

A hiatus in both womens’ musical projects gave them the chance to get together and get creative – Matthew Hopkins was born in 2016. Max completes the team, bringing exceptional musicality and skill to the band.

Their debut single “Something” will be released on November 2nd. Two further tracks “Lachrymose” and “Hey Joe” will be released at the same time but as Subscriber Only specials via our Bandcamp page. More information next week – pending that here is the link to the video of “Something”. 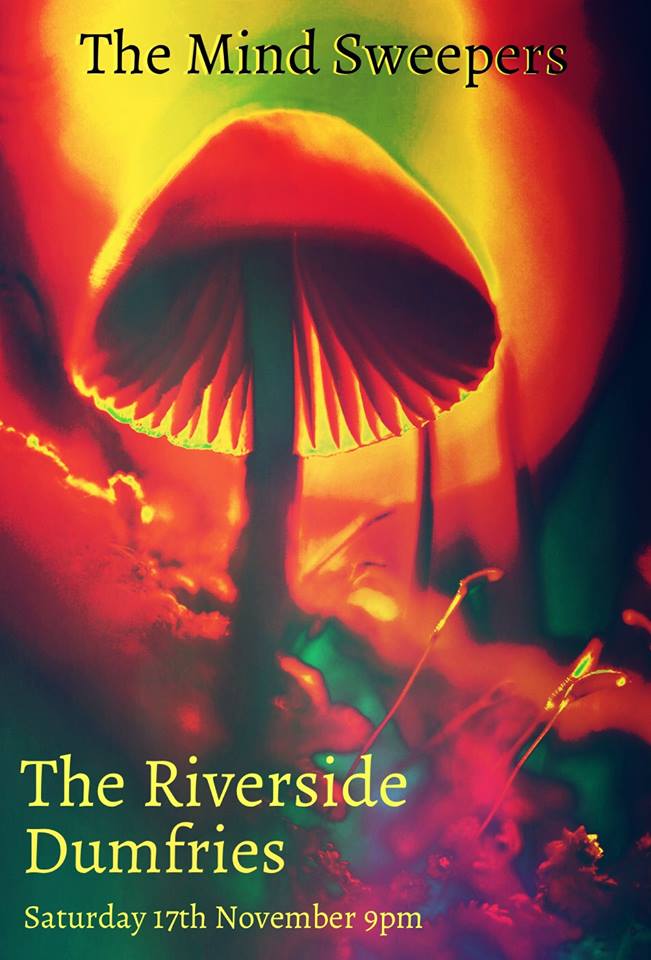 The Mind Sweepers are back with a gig at The Riverside in Dumfries on November 17th.

Hello again and welcome to our weekly newsletter. In this edition

July 6th sees the release of a first collaboration between the Auster Boys and Moet. Titled “Unnatural Appetites” this seven-track collection contains some fantastic and fascinating new music.   Whilst Bob Auster South works on new pieces of text Moet has been co-opted to work within the Auster catchment area. The music is deliberately more brutal and scary than the usual Auster offerings. Descriptions of the tracks are as follows
Bob Auster North – Sound Design and Production
Moet – Vocals & Lyrics
Bob Auster South – Conceptual Continuity
Adopting a brutalist electronica approach the Austers combine perfectly with Moet’s rhetorical polemic
You can preview opening track “HMK” here

THE STRAYS EMBARK ON A SUMMER TOUR

Increasingly popular Punk Duo The Strays share their wit and wisdom in a variety of towns and venues as listed here. Don’t miss a chance to see Jon and Georgie mixing politics, humour and punk and creating a great live experience.

Multiple thanks to our resident video historian Paul Forshaw for capturing Four Candles in all their glory live a the Peer Hat last Saturday launching the new album “Spiritual Rapture”. WARNING – THERE IS SOME VERY STRONG LANGUAGE IN THIS VIDEO